Public optimism in their personal economy has hit a 16-year high under President Trump, according to a new survey.

Some 69 percent told Gallup that they expect their personal finances to be even better next year, just shy of the record 71 percent when the internet boom was raging under former President Bill Clinton.

What’s more, the survey company said that 50 percent believe they are “better off” than just a year ago when the current economic surge was kicking in and when the White House coined the phrase “MAGAnomics.” 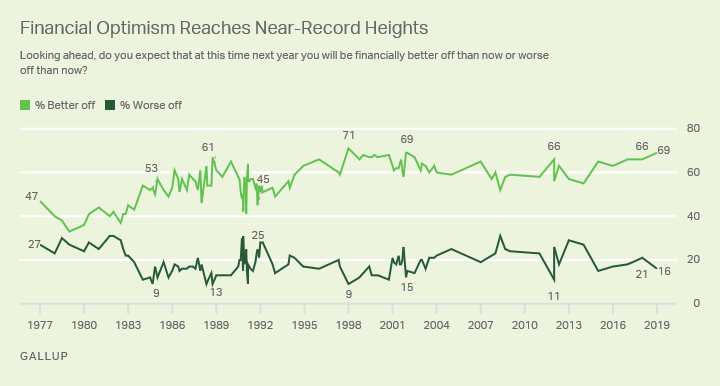 Gallup said that is the first time the level has reach 50 percent since 2007.

“Americans’ optimism about their personal finances has climbed to levels not seen in more than 16 years, with 69 percent now saying they expect to be financially better off ‘at this time next year,'” said Gallup. – READ MORE

MSNBC’s Stephanie Ruhle Bashes Reports of Klobuchar Abusing Staff as Sexist : When Have We Ever Called a Man ‘Bossy?’